Niagara gripped the imagination of not only travellers and writers, but also of engineers and entrepreneurs.  Many of these “envisioned the fall’s industrial and economic potential as limitless” and “they imagined a colossal, utopian future that would inevitably result from the relentless human drive to subdue and transform nature.” (McGreevy)

In his book Imagining Niagara  Patrick McGreevy argues that the idealization of Niagara Falls and the association of the falls with industrial progress and the future are intimately connected, writing:  “My contention here is that industrial development and idealization are intimately connected.  Visions of the future began as an extension of Niagara’s idealization. The Falls’ industrial development depended upon a host of factors that could be examined through traditional economic and locational analysis, but this development was also a matter of imagination.”

Although industrial development of the Falls began already in the early nineteenth century, McGreevy posits that the idea of the future became bound up with Niagara Falls with the beginning of hydroelectric power in 1895.  It was in that year that Nikolai Tesla and George Westinghouse built the first hydro-electric plant in the world at Niagara Falls, harnessing the tremendous power of the falls to generate and transport electricity, marking the victory of the former’s Alternating Current over Thomas Edison’s Direct Current. 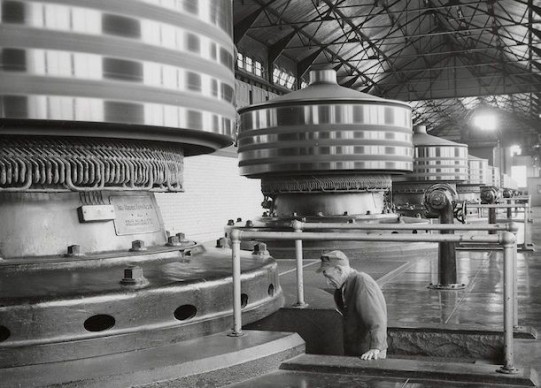 Their achievement amounted to no less than a revolution that led to the electrification of the world.  The history of hydro-electric power at Niagara Falls is fraught with controversy, but by mastering the creation and distribution of electricity Tesla improved lives immeasurably, conforming to a positive view of progress that supports the idea of humankind using science to improve the material lives of the many.

Tesla’s scientific achievement helped to inspire a vision of a future Utopian society located at Niagara Falls in the form of King Camp Gillette’s socialist urban planning vision The Human Drift, published in 1894.  Gillette, better known for his invention of the safety razor with disposable blades, imagined a magnificent city called Metropolis at the site of Niagara Falls, which would be entirely powered by electricity generated by the Falls.  He wrote:

For many reasons I have come to the conclusion that there is no spot on the American continent, or possibly in the world, that combines so many natural advantages as that section of our country lying in the vicinity of the Niagara Falls, extending east into New York State and west into Ontario. The possibility of utilizing the enormous natural power resulting from the fall, from the level of Lake Erie to the level of Lake Ontario, some 330 feet is no longer the dream of enthusiasts, but is a demonstrated fact. Here is a power, which, if brought under control, is capable of keeping in continuous operation even manufacturing industry for centuries to come, and, in addition supply all the lighting… run all the elevators, and furnish the power necessary for the transportation system of the great central city….

Gillette envisaged that electricity would lead to increased mechanisation, resulting in improved efficiency and increased wealth for all;  social progress would naturally follow.

Human Accumulations explores the themes of Nature, Progress and American Identity through the comparison of five iconic East Coast American landscapes, as they were represented by the Hudson River School artist Regis Gignoux, and as they appear today through the lens of his descendant, photographer Alan Gignoux.